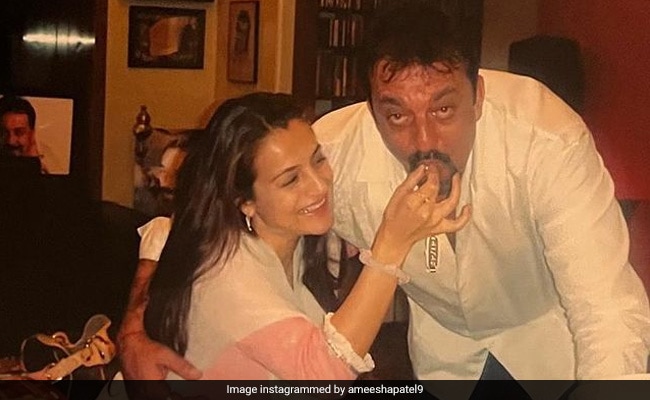 Ameesha Patel’s throwback game is getting stronger every week. Her latest upload features Sanjay Dutt. Ameesha, who is a close friend of Sanjay Dutt, shared a picture from the time when he threw her a birthday party. Dressed in a pink outfit, Ameesha is seen feeding Sanjay Dutt a piece of her birthday cake in the throwback photo. The two have worked together in films such as Tathastu (2006) and Chatur Singh Two Star (2011), among others. Ameesha Patel described Sanjay Dutt as “the most golden-hearted man in the industry.” She wrote: “Throwback weekend… my private birthday celebration (at) Sanjay Dutt home… with only closest friends and family. My darling Sanjay Dutt made it so special for me… the most golden-hearted man in the industry.” Ameesha has also worked with Sanjay Dutt in Yeh Hai Jalwa.

See the photo of the actress from her birthday party at Sanjay Dutt‘s house here:

Ameesha Patel started posting throwback pictures from her personal and professional diaries in August. From Shah Rukh Khan and Salman Khan to Aishwarya Rai Bachchan and Anil Kapoor, her timeline has glimpses of some of the top actors of Bollywood.

Here, Ameesha Patel is seen laughing “on some silly joke” with Aishwarya Rai Bachchan at a show. She captioned it: “Hey guys… as promised the throwback weekends that I started last week upon so many requests. So, here (it) goes…The beautiful Aishwarya Rai Bachchan and me as chief guests at a show cracking up on some silly joke we had cracked and we could not stop the laughter.”

In this photograph with Shah Rukh Khan and Gauri Khan, Ameesha Patel is seen twinning with the couple in black outfits. She wrote: “Shah Rukh Khan and me at a prestigious event as chief guests … accompanied by the stunner Gauri Khan. Shah Rukh is one of the most charming and witty men you can come across…and Gauri is extremely gracious and warm.”

On the work front, Ameesha Patel is currently prepping for Gadar 2, the sequel to her 2001 blockbuster. The film also stars Sunny Deol and Utkarsh Sharma.