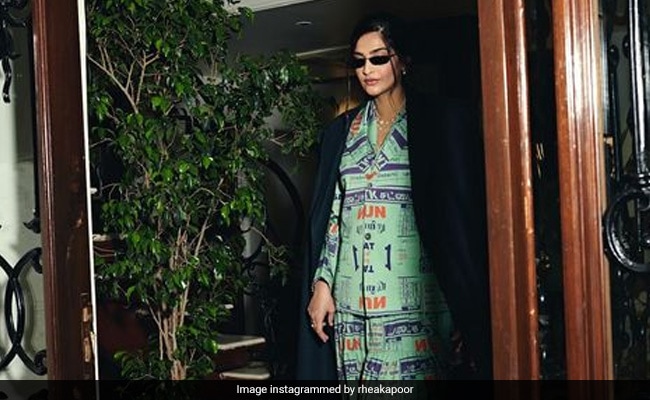 Sonam Kapoor is Bollywood’s original fashion queen and her sister Rhea Kapoor has a new Instagram post to remind you of this. In a set of images shared on Instagram, Sonam Kapoor is seen dressed in a mint green dress and a black blazer. With a Gucci bag and black boots from Tod’s, Sonam looks like the ultimate fashion diva in the images shared by Rhea, who has also styled her sister’s look. Sharing the post, Rhea wrote, “Come thru,” and also added a flight emoji. Anil Kapoor replied to his daughter’s post with fire emojis. Fans of Sonam also praised her in the comments section, showering the new mom with heart emojis.

Sonam Kapoor also shared a montage video of herself in the look. In the caption, she wrote, “Delhi!” and shared details of an event she was attending in the capital.

Sonam Kapoor’s glam photos come just months after she gave birth to her son, Vayu. Announcing the name of their child, Sonam Kapoor and Anand Ahuja shared a lovely photo of their family and said, “In the spirit of the force that has breathed new meaning into our lives…In the spirit of Hanuman and Bheem who embody immense courage and strength… In the spirit of all that is sacred, life-giving and eternally ours, we seek blessings for our son, Vayu Kapoor Ahuja. In Hindu scriptures, Vayu is one of the paanch tatvas. He is the deity of breath, the spiritual father of Hanuman, Bheem and Madhav and He is the incredibly powerful lord of wind.  Praana is Vayu, a guiding force of life and intelligence in the universe. All the deity’s of Praana, Indra, Shiva and Kali relate to Vayu. He can breathe life into beings as easily as he can destroy evil. Vayu is said to be heroic, brave and mesmerisingly beautiful. Thank you for your continued wishes and blessings for Vayu and his family.”

After the birth of her son, Sonam Kapoor shared a video of her getting hair and makeup done for a special occasion with Vayu in her arms. In the caption, she said, “It’s so nice to get back to the real world with my team, get dressed up and meet people.. love being back in my home ground. Love you #Mumbai with all your scars and cracks you’re magic.”

Sonam Kapoor and Anand Ahuja have been married since 2018.